Originally from South Africa, Florence Ngobeni now lives in the United Kingdom. After losing her first husband and child to HIV, Florence has since remarried and has two HIV-negative children. She has worked at a clinic in Soweto, South Africa and is also a trained professional in psychosocial support. 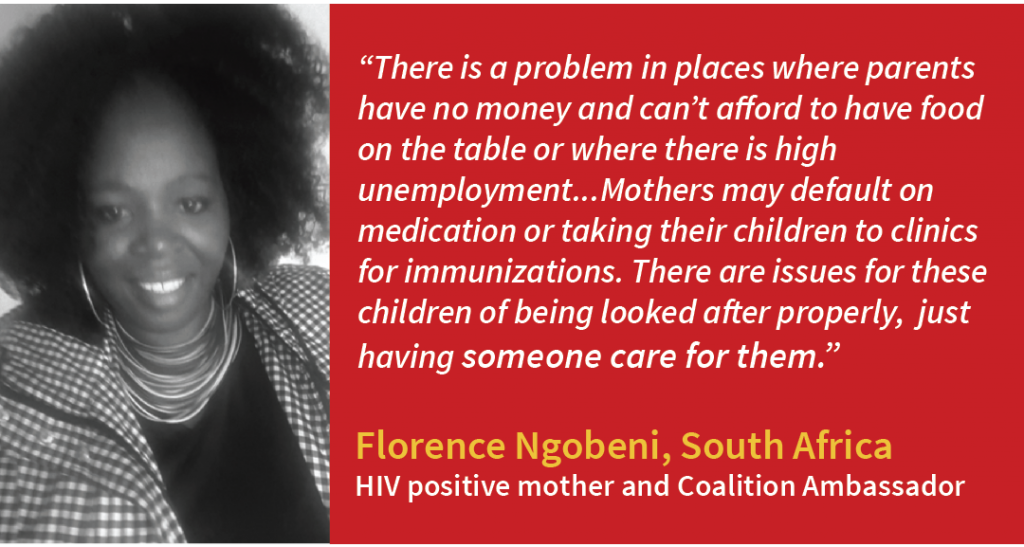 Three months after giving birth to my daughter 23 years ago, I found out that I was HIV positive. My husband passed away and, two months later, my baby passed away. I was left having to mourn.

I disclosed my status at home and I never had any issues with my family rejecting me. But in the community, people were calling me names. It was back in the days when people didn’t speak about HIV. There was no treatment back in those days. I worked as a counselor at my doctor’s office and learned a lot about HIV. I learned about treatment for pregnant women to prevent children from getting HIV. After I remarried, we tried for children and were blessed with two little boys who are both HIV negative.

People automatically think if a child is HIV negative that they are fine. And that is not the case. My son gets very depressed when I am sick. He worries “are you going to wake up?” Whenever my older son stays home sick, he asks me if I am also sick.

A child who is HIV negative still has to face issues of stigma and discrimination in school. I live in the UK, and I am terrified for my sons’ school to know that I am HIV positive because I don’t want them to be treated differently. Stigma has a huge impact on children’s self-confidence.

Children need someone beyond their carer to speak out. We’re trying, but it’s not enough – the priorities are still not meeting their needs.

The Coalition is looking at supporting communities, which has been my interest as well. I want to support women and children in the communities, helping them to advocate for accessibility of services and to make sure their voices are heard. I want to give them a platform and for them to have a safe place where there can be a dialogue.

Another area of focus is psychosocial support. This has been so important for me; even though there was no treatment when I was first diagnosed, this kept me sane. I ran support groups and had access to counselors. That was really meaningful. You could talk about how you felt and seek advice. It educated me a lot about the disease. You could hear people’s views, but also hear about scientific developments. You knew that you belonged somewhere.

Attending conferences, which is a part of my role as a Coalition Ambassador, is also critical. It is not just getting to know about the latest research, but also speaking to people about the developments in HIV and ironing out misconceptions. This is what prompted me to be an advocate.

The most important change I would like to see

When I had my daughter, I was married and very young. I didn’t have any social or economic support. I relied on my daughter’s father to look after us. That is a problem in places where parents have no money and can’t afford to have food on the table or where there is high unemployment. It perpetuates things like domestic violence and abuse and also affects children’s well being. Mothers may default on medication or taking their children to clinics for immunizations. There are issues for these children of being looked after properly, getting school uniforms and just having someone care for them.

Domestic violence also contributes to women moving from one place to another, looking for safety and for work. The displacement of women contributes to the lack of continuity of care for children and for themselves. Communities need to work together in fighting women and children abuse.

I have personally experienced absolute poverty. I know how important it is for women to have a way of making money that is not risky or that puts them in compromising situations. The Coalition is providing guidance on how communities can best support women in these situations, by offering them some financial relief to give them dignity and support.

Also, when women must have access to clinics where they are accepted for who they are and can receive information. When I gave birth to my sons, I spoke to a dietitian. I learned about nutrition that can help prevent infections the infections that children under five are prone to. But that information is not available to all women.

As children become adolescents, they need support more than anything else. If they can’t talk to their parents, they can talk to health care workers. But there are issues with healthcare workers being sympathetic, especially because they are over burdened. There is no one dedicated to talking to children about their issues.

Adolescents also struggle with taking their medications, especially their ARV’s. Adherence can be improved with access to mental health services and access to friendly reproductive services for youth.

I know so many children who have grown up and are now 25 and 26 living with HIV. I think talking about HIV openly with their families is still a challenge. Medication is prolonging their lives and they are healthy. Some of them are thriving. But some of them are having problems because they don’t want to disclose. They are depressed because they don’t know why this is happening to them.

What gives me the most hope

Thee are various treatments that women can take to prevent HIV. You can live longer and healthier with HIV. If you’re in an environment where it’s known and accepted, it’s even better. It helps you contribute positively to the community.

Research has made huge strides in looking at vaccines and cures. It is helping to make AIDS a disease whereby people are not too worried about it again. But, there is a danger that it could become an epidemic if people don’t use preventative measures.

Advocates are tireless about efforts to create a medication that is palatable for children, determining the right measurements, and ensuring accessibility. It gives me so much hope.

We need to listen to them more and never take anything they say for granted. We have a tendency to dismiss kids. We have everyone talking to them and we’re not hearing much about what they want.