From One Radical, Courageous Woman to Another 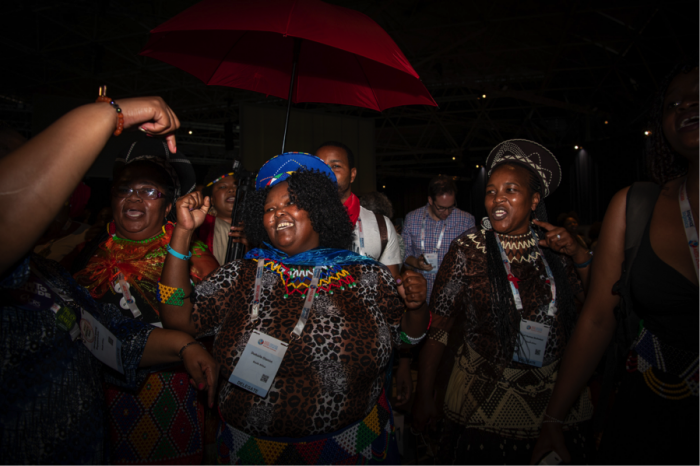 Dudu Dlamini (center) makes her way, by celebratory parade, through the RAI Conference Center in Amsterdam to accept the 2018 Prudence Mabele Award.

One of the highlights of AIDS 2018 was the inaugural Prudence Mabele Prize, honouring radical and courageous women making deep connections between the fight against HIV, feminism, and gender and reproductive justice.

The Coalition could not be more proud that our own Ambassador, Duduzile Dlamini (Dudu) is the very first individual to achieve this recognition. Dudu is a mother, a sex worker and a passionate advocate. She is a force to be reckoned with and an invaluable champion of sex workers and children affected by HIV and AIDS.

“I have faced several challenges on my way here, but each one of them has only strengthened me to make me the person I am today. I am grateful to share the same determination that Prudence had. It is a privilege that I may carry on this legacy with my own work.“ – Dudu Dlamini

Born in a small, rural area in South Africa, not long after the end of apartheid, Dudu’s opportunities for education and work were limited. As the eldest child, she worked hard to help support her family. After moving to Cape Town in the hopes of securing a job and providing for her family, she encountered challenges including xenophobia, abuse and rape. In order to afford a place to live, the ability to send money home to her family, and to have help looking after her children, Dudu became a sex worker.

Dudu’s personal experience ignited a fire within her to decrimilize sex work – to ensure that sex workers receive essential human rights including safe and fair working conditions, access to services and an opportunity to open bank accounts. She knows that it is difficult to practice safe sex or access abortions and HIV treatment as a sex worker while the work is still criminalised. She knows, too, that this leads to the rising HIV infections among sex workers and their children.

Embodying the spirit of Prudence Mabele

Dudu has been a part of the Sex Workers Education and Advocacy Task force (SWEAT) for eight years and now runs the Sisonke project, fighting for sex work to be recognised as work in South Africa, and to ensure sex workers’ health and human rights. Through her work with SWEAT, Dudu has been able to focus on the law, has learned her rights and has educated her peers as a human rights defender. She is well versed on trafficking and human rights issues and became involved as a lobbyist and community development leader. She speaks regularly with high level parliamentarians in her country and globally and welcomes the opportunity to fearlessly speak truth to power, to shape decision making in the fight for sex worker rights, and to ensure that we reach all HIV affected children and families.

It is due to the tireless work of Dudu and her peers that the issue of decriminalization and the plight of sex workers have gained momentum within the South African government.

Understanding that sex workers are particularly vulnerable to HIV, Dudu worked with the Coalition to conduct peer interviews to identify the unique challenges their children face as well as opportunities to reach them with treatment, care and support.

“Sex-workers face stigma and discrimination directly. Our children face double the stigma. These children face daily rejection and abuse at school and in their communities.“ – Dudu Dlamini

Going house-to-house and meeting different mothers, she found alarming gaps in medication for children as well as profound stigma and discrimination. In pregnancy, sex workers are often still working and may not be using condoms, making them particularly vulnerable to HIV infection. Many are sleeping on the streets, which has implications for mother and baby. They also lack family support in pregnancy and in post natal care. In addition, there is poor coverage of HIV testing for these mothers and their newborns. Poor uptake of antiretrovirals after testing puts them at greater risk of transmitting the virus to their baby and affects their health and ability to work or care for children.

To help address these challenges, Dudu established Mothers for the Future (M4F). M4F provides direct support services for mothers that are rarely otherwise supported. It helps to ensure that children of HIV positive sex workers have the support they need — including treatment, nutrition and housing — to be healthy and thrive.

There is an assumption that being a sex worker and being a parent are mutually exclusive. This is overly moralistic and inaccurate. Denying sex workers the basic right to parent their children creates an environment of systematic neglect. 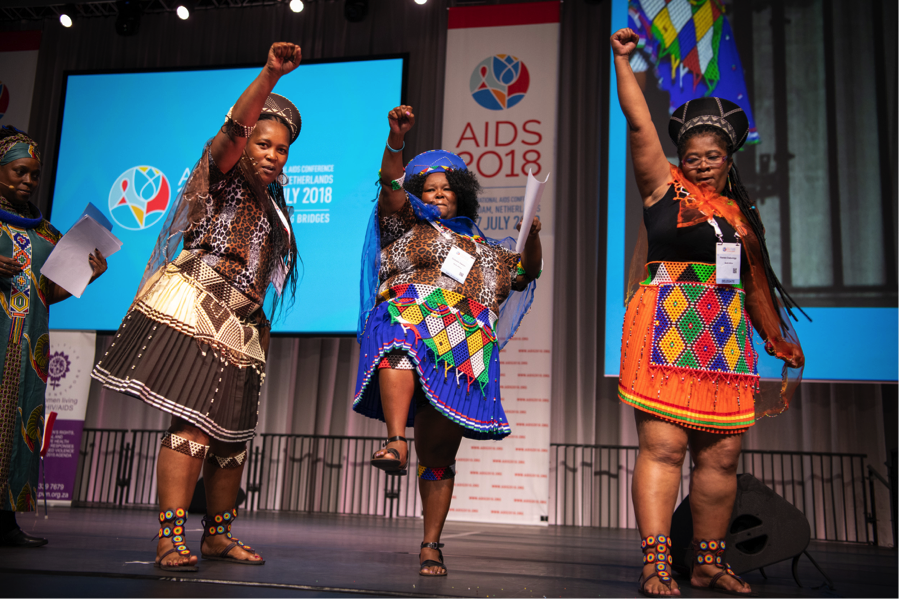 Dudu Dlamini (center) and colleagues celebrating her acceptance of the Prudence Mabele Prize.