In honor of World AIDS Day, and this year’s theme of “Know Your Status,” the Coalition asked each of our Ambassadors why it is so important for people to know their status and what they think may be standing in the way.

In the second blog in this series, we spoke with Clara Banya, a mother of two children, one of whom is HIV positive. Clara is very focused on addressing stigma, improving access and adherence and supporting caregivers affected by HIV so that their children can survive and thrive. She is part of the Global Fund Advocates Network and National Coordinator for the International Community of Women Living with HIV (ICW Malawi Chapter). 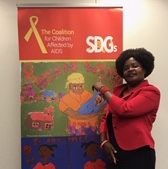 When and how you did you find out about your own status?

It was early 2000. They were just scaling up care, treatment and support. In Malawi, treatment was only available as a pilot program; you couldn’t find it in every clinic.

I was 25 and working as an HIV counselor. When you are a counselor, you are taught to be empathetic. I often put myself in the shoes of those I counseled. I remember testing a lady who was 79 and it came out positive. She came back and asked, “When are the HIV medicines coming?” I told her the medicine was coming soon. But she said “Clara, I think I am dying.” She was the sole bread winner for her grandchildren. A lot of her children had died. But she died before the medicine came.

There was also a lot of stigma and discrimination. I had seen a lot of women being chased away from marital homes being told that they were the ones that had brought HIV to their homes.

These stories made me sad, but gave me a passion.

I was familiar with the conditions and noticed them in myself. There were four counselors using the room where I worked, but one day I waited for the other three counselors to go to lunch and I tested myself. I couldn’t take chances that my colleagues would know the very same day that I found out myself. I knew I needed space to reflect and process myself; and maybe grieve about it, as well.

After I learned my HIV status, I said “This is it. I’ll start community work.”

What were the biggest challenges you faced in finding out your status?

Despite having all the information, and having counseled and given hope to a lot of people, I had a fear when I was waiting for the results to come out. The results came as a shock, like for anyone else. I waited three months until I told my husband. I only told him when I tested my daughter. She was not showing any symptoms, but I was still breast feeding her. I tested her in secret. When the test came back positive, I had to disclose to my husband.

What is the biggest challenge facing young people today in knowing their status?

A lot of children are HIV positive, but their parents don’t know that they are. When a woman has been tested at the antenatal clinic, many don’t go back to the clinic to start medication. They are lost from the support and care cascade.

There are children who are at higher risk that are contracting HIV. (Because we have not identified these children) we assume they are out there without knowing their status.

Parents who are able to test their children and know that they are HIV positive have had problems disclosing to the child until they grow up. That is very late and has a negative impact on children. Some children choose to stop taking medication and they die. There is a need for programs that can support parents to disclose status about children at the right time and right age.

I told my daughter of her HIV status when she was 11. But I could not have done that without the help of healthcare workers at clinic. With their help, I started partially disclosing to my daughter when she was seven. I started using terms that are often used with HIV. I talked to her about why she was taking medication. The clinic provided language that I could use like, “You need to take this medicine to stay strong and not get sick.” I did this slowly until the time that I could fully disclose her status. It was a four-year process.

What kinds of programs, services and support would help young people in determining their status?

We need youth friendly services, health care workers who are more sensitized and peer support services. Over the years, I have seen a decline in them. What I see being scaled up are teen clubs meant for HIV positive children to support with adherence and other challenges they face. But we need to revamp peer support programs for teenagers.

What, in your opinion, is the greatest accomplishment for children, adolescents and families in the time that you have been involved in the fight against HIV/AIDS?

There are a number of prevention tools such as condoms and voluntary male medical circumcision. PrEP is available in some countries like Kenya, but it’s not being given in Malawi. We have to make these tools available for young people as well as adults.

But with most of the available tools, women depend on a male partner. There is a history that, because we don’t have economic status, the negotiation power is not there. You can’t negotiate to use a condom or for a man to have circumcision. But Dapivirin is a drug that can give young women power over their body and prevent them from contracting HIV. That is an exciting accomplishment.

What are the greatest challenges that remain for children, adolescents and families in the fight against HIV/AIDS?

There are a number of challenges that adolescents face. Clinics are not youth friendly. Even if adolescents have a sexually transmitted infection, they find it hard to go to the hospital because they worry about being judged by health care workers. So, they shy away from medical services. Even with youth friendly services, if they go to ask for condoms, they hear, “At your age you’re already having sex?!”

But we can’t run away from the reality that this group of children are indulging in sex. And that sex is, unfortunately, unsafe.

There is a secret culture that Africans have; we are not open enough with our children. As a result, children are deprived of information. But I believe that if you are a parent and you talk to your child, the child takes what you tell over other people.

On this World AIDS Day, what message would you like to give the world?